Captain America. The government intervenes. The Avengers have a choice. The choice is split. Captain America vs Iron Man. Civil War. Someone pulling the strings in the background?

Ok, so another new Marvel film and I’m definitely a fan of the Marvel films, even if I’m a bit slow on the ball with this one. I love the fast-paced action, the colourful scenes, oh and the brilliant actors and actresses playing the best superheroes. This film is not any different. Especially that some of the Avengers (other than Captain America) make an appearance. What is not to love? Well, there was a few issues for me sadly… But this didn’t much affect the film, it’s still a good Marvel film, I just wouldn’t say it’s the best.

So the plot was a bit confusing. I don’t know if you have to know the Captain America story inside out and this is where I fell down, but the beginning was a tad confusing for me. I would definitely recommend the other Captain America’s before you watched this one. However, still some parts were confusing at who was who… Or where the film was heading. Although after this started to kick in and things started to make more sense the film picked up incredibly. There was a lot fast-pace action so familiar to Marvel fans, where a lot was going on at the same time, although this is the fun and action of the film, and it definitely wasn’t let down by this. The graphics were great, everything just looked real in a world of superheroes. All your favourite superheroes kicking ass. Ok not all your favourites, personally Thor is mine and he wasn’t in this one, nor was the Hulk; however, it is predominantly a Captain America film. But joining Captain America is Natasha Romanoff, ie. Black Widow, Tony Stark, ie. Iron Man and Clint Barton, ie. Hawkeye. All of them familiar from the amazing Avengers films, and of course played by the brilliant same people, or that would cause an outrage. Imagine someone else being the snarky Iron Man other than Robert Downey Jr?! It just wouldn’t be right.

This film is quite long as well, but once past the first part this doesn’t make much of an effect on the audience. ‘Captain America: Civil War’ does require constant attention to, it’s an easy watch, but you just need to watch it all. Something that I did notice, is that it does seem to be a film of all around the world, jumping to so many places. However, this is easy to know where they are, with the massive words of the place popping up on the screen; although this may be seen as drawing your attention to the fact that it is a film because the words were so big on the screen, but then again maybe you need them to understand the film, it could be more confusing without.

Something I actually loved about this film was the two new additions! These were Spider-Man and Ant-Man. They both were brilliant additions, they were hilarious in their own way. Paul Rudd has always been a favourite actor of mine, and now this film has just made me want to see Ant-Man even more, sadly haven’t seen it already! And the new Spider-Man, can’t wait until that comes out! Tom Holland was excellent, he is definitely pronounced as the young one of the new team, especially as the actor himself is about 20 now, surprisingly, he definitely looks younger! Maybe it’s the contrast to all the others… But his chatting away was brilliant during the fights and comical for the audience. I’m so happy with these two new additions, even if only for one fight scene, but I feel they made such a difference to the film. 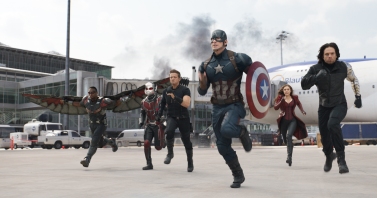 I would recommend this film, especially if you’ve seen all the other Captain America’s. The film is full of fast-paced action, colourful fun scenes, amazing actors and actresses, busy fight scenes, and some funny moments. If you’re a fan of Marvel this has to be on the list (but I guarantee you’ve probably already seen it). ‘Captain America: Civil War’ is a good watch, but not the best Marvel film. But hey, what sides wins?