The second of the Divergent Series and it is a great one at that. You do need to watch these films in order otherwise they couldn’t be more confusing. ‘Insurgent’ leads straight on from ‘Divergent’, so if you haven’t seen the first one, there will be spoilers, otherwise ‘Insurgent’ would become very difficult to review without the knowledge of ‘Divergent’. If you haven’t seen ‘Divergent’, click the link to take yourself to my review on the first film of this great sci-fi series.

After the upset and destruction of the first film, ‘Insurgent’ explores the mishaps of the numerous deaths of Abnegation and the mass uproar of Divergents. As Jeanine (Kate Winslet) stands as the head of the society as she wanted, she twists the stories of the mass murders. All blame is placed on Divergents as they become the fault against peace and harmony, they become societies’ “one true enemy” as she so strongly tells everyone. This twisted society then makes all Divergents hunted and all factions are tested. Jeanine becomes persistent in finding the one true Divergent to open the hidden box they found in Abnegation. Fugitives, Tris (Shailene Woodley), Four (Theo James), Caleb (Ansel Elgort), Peter (Miles Teller) and Marcus (Ray Stevenson), find gratitude in the peace and harmony of the Amity faction. But it’s not long until they have to leave. On the mission of hiding, fugitives are soon split up and are each for themselves. The film is of these fugitives on the run trying to formulate some sort of plan. ‘Insurgent’ definitely explores the factions in more detail, we travel from Amity, to the Factionless and even pop to Candor, to end up in Erudite. We travel the whole entirety of this fenced city, in every one the fugitives hit a multitude of issues with action and thrilling moments.

There are again more simulations of this film, which I think are great! You are always watching second guessing whether what you are watching is real or fake, it is really well done. Of course, the graphics are great too as you fall into simulations of burning, flying buildings or reality of the hunts. Although, I do have to admit, it does seem in some parts that Tris should have been shot in extreme fighting moments when in reality she doesn’t, but maybe she’s just that good. We get to know Tris’ brother, Caleb, more in this film as he is weak in fights and struggles to come to grips with everything that is happening. We also get to know Peter more, and the selfish sacrifices he makes. Four is still as mysterious as ever, as his life continues to be revealed slowly. The major difference is Tris, the main protagonist full of hatred and anger. She becomes a worsened version of herself, drowning in guilt of the deaths from the first film, particularly the death of her mother. She is driven by one thing, the hatred of Jeanine, all Tris wants is for Jeanine to be dead. Not very Abnegation of her… 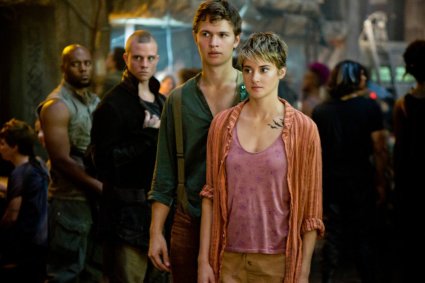 ‘Insurgent’ is a great film, it’s a brilliant second film to the Divergent Series. I don’t think it’s as good as the first one, because I think there are more thrilling moments. However, ‘Insurgent’ is a great follow-up and does continue the story well. If you liked the first one, I don’t think you would be disappointed by this one. Plus, they keep leaving the films on cliff-hangers, so don’t you have to watch this one?

One thought on “The Divergent Series: Insurgent (2015)”