I really quite enjoyed the first ‘Hotel Transylvania’ and the second too. But what happened when it’s come to the third? It’s the same director, so I thought it would have the same essence as the first two. All the original monsters are back, and the same voices, the great voices, Adam Sandler, Andy Samberg, Selena Gomez, Kevin James and David Spade. This one even brings in the voices of Kathryn Hahn and Joe Jonas. So what went wrong?

Quick plot: Everyone is in love, happily married, and it’s getting to Dracula (Adam Sandler) that he doesn’t have his one true “zing” (love) with him anymore. In a desperate act to get her father away from work, daughter, Mavis (Selena Gomez) plans a holiday, a cruise for all the monsters. Although, unknown to her and everyone else, the captain of this cruise happens to be in the family of the monster-haters, and it’s her and her great great (I don’t know how many greats – it’s silly) grandfather’s plan to kill all of them. With a mass of dancing and singing, the monsters go on a cruise to visit places they’ve never seen before, a kid’s play area for the mass of babies, a singing Joe Jonas Kraken and a massive glow-in-the dark party. Oh and what else? Dracula happens to “zing” again, something he thought would never happen… to the one and only Captain Ericka (Kathryn Hahn), the one who wants to kill him. Obviously. Bit predictable, but it is a kid’s movie. 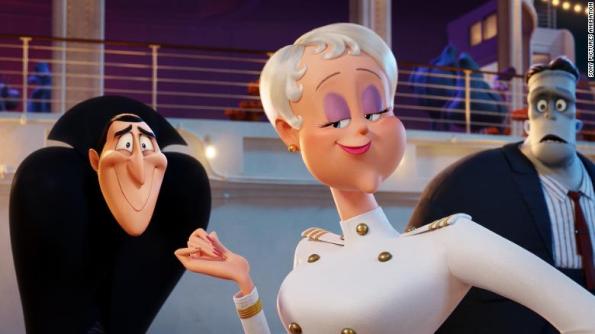 ‘Hotel Transylvania 3’ was to say the least, a bit OTT, a bit over the top. Wayyyy over the top. It felt very wound up from the beginning, and it didn’t seem to settle down at all, one thing on top of the other where it just got stranger and crazier. The whole film was just trying too hard to be modern and relatable but it missed, it didn’t quite work. The whole connection to everyday life really did flop in this film, didn’t work the way it could have, it seemed too forced. It seemed as this film was a bit too been there done that.

Heavily built on music, it again got OTT with the music. With the modern edge again, it was trying to connect to clubby dance music that seems to echo all the charts at the minute. But it was unnecessary. Nothing seemed to make sense of when this music would occur, it could have done better with some tunes that embedded into the narrative. Oh and the random evil dance off was just odd, although I do have to admit the randomness of it did make me giggle.

Ok ok, it wasn’t dreadful! It really wasn’t. But sadly, it just wasn’t close to the standards of the first two films. I think ‘Hotel Transylvania’ may have run its course. I feel like ideas on kid animation Dracula and family may not have many ideas left. It’s all a bit done now. Also, Andy Samberg playing Mavis’ husband Johnny, was a bit alien in this film too, I wanted him to be in it so much more like the other films! Of course, there were still parts I did have a giggle at, random as they were, I did think some parts were funny. I wasn’t a horrendous film, but I can’t say it’s one to remember.