Well to start off, this is a film definitely worth watching. If you like shark films then you will definitely appreciate this one. Even though, I’m not a shark fan, like seriously, they scare the living daylights out of me… I still appreciated this movie. It was cleverly created to keep the audience in constant tension. And because of this it was full of suspense and delivered a watchable, yet not want to watch, shark horror film.

Everyone must have seen the trailer. I don’t know if it was just my friends circling it around on FaceBook, or whether it be that I follow Blake Lively on Instagram; but nevertheless I saw the trailer highly advertised. There is no hiding the fact that this film is one based around one girl and her attempted plan and escape from a shark. However, because everyone knows this is what is going to happen there isn’t an element of surprise when we finally notice the shark in the waters. Although what the film does really well is that we don’t actually know when it’s going to appear. The start of the film throws the audience into suspense of a shark we know is coming. But when? Now? Not yet. What about now? Nope. Tension builds up before we even see the shark. Then it comes. And it comes hungry. Hungry for fresh meat, most significantly, fresh meat of a human. The best thing, the tension doesn’t leave here either. The shark goes. Swimming in depths we can’t see. But he comes back. Making the audience feel uncomfortable to when the shark is next appearing and whether the poor trapped girl will make it out alive.

There are a few clever ways this tension is built up in this film. Firstly, there are many under water shots. This is similar to ‘Jaws’, where it seems that the camera is coming from the shark’s perspective and is hunting its prey. Alike to ‘Jaws’ again, they trick the audience purposely to think this, that the shark is coming, when it isn’t, or is it? Secondly, there are many moments that are slowed down, the audience watch them in slow motion. This focusses the audience on certain aspects of the film, but also making us think something is about to happen. This is blended in with tense fast music, another aspect to create this tension for the audience. It also helped that the shark looked quite realistic. Compared to ‘Jaws’ again, the shark was good for 1975; but ‘The Shallows’ came out in 2016, this year, so thankfully the shark looks realistic and scarier for the audience. These aspects all truly add to the atmosphere of the film and make it that much more worth watching. I’ve never been so tense for a whole hour and a half before… The film created so much tension that the audience couldn’t feel much other than stress or surprise. Obviously, this was done on purpose so it makes it a brilliant horror.

Another thing I really liked about this movie is that it was so brilliantly played by Blake Lively as Nancy. We learn a lot about the main protagonist herself, this makes the film so much more realistic for the audience, we can connect to this loveable character. Nancy is a girl who recently dropped out of med school and is travelling in order to get some alone time, after a recent tragedy in her life. This really creates depth into her character and makes her a character the audience wants to route for. 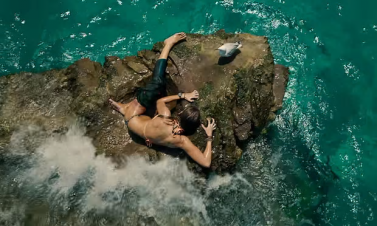 This film was made this year, like I’ve already stated; and what I liked is that this was also when the film was set. The way this is shown is through the technology of the film, which I really liked, to make it look so modern. It is cleverly done, with the FaceTime on the screen for the audience to see, going into the details of jumping, because no one ever has good quality. Also the texts popping up or her scrolling through pictures which are telling the audience things about her past. So not only are these things modern for today’s audience, but are telling the audience even more about the protagonist without actually saying it, but hinting at things.

This film does seem very realistic, and I liked this, it made it scarier. There are some parts of look away gruesome, or screaming at the screen for Nancy to get out of the water, or to ask her what the hell she thinks she’s doing! There’s gasps and turned away heads. It really is a film to grip an audience to see how she’s going to get out of this one.

So overall, it is a film I would recommend. If you’re in for a thrilling tense film, then this one should be at the top of the list. Plus, Blake Lively is great in it, if anyone says she can only play the American Upper Class girl from ‘Gossip Girl’ they are mistaken in the character she plays in ‘The Shallows’.